Geographically, Costa Rica lies between Nicaragua and Panama in Central America and has only 4.7 million inhabitants. It is, however, one of the most advanced countries in Latin America.

Well, a lot spoke – at least for us – to get to know this country: 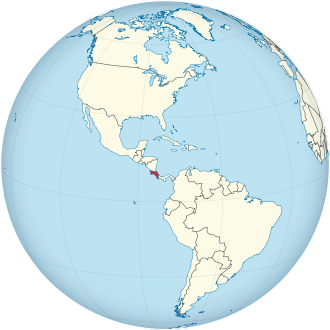 Costa Rica is a green Country (in reality and in the environment). Over 96% of the required electric power is produced from water, wind, thermo and other renewable resources. No nuclear power plant burdens our offspring with unsolvable problems.
Officially, a few years ago, the country had already decided to convert its energy supply to 100% on renewable energies by 2021. Almost 80% of the renewable energy is extracted from hydropower, mainly from Lake Arenal, a reservoir at the foot of the Arenal, the largest volcano in the country. The existing volcanoes are also used for energy production, more than 15 percent of the renewable energy comes from geothermal power plants. The rest is mainly provided by the wind energy, which has grown enormously in recent years.
Costa Rica has the oldest (functioning) democracy in Central and South America.
Costa Rica has one of the largest biodiversity on earth (and in the smallest space)
Costa Rica has united all seven world climates on a tiny surface
Costa Rica is located on 2 different oceans
Costa Rica is safe
Costa Rica makes it relatively easy to have a legal residence status for foreigners
Costa Rica treats locals and foreigners alike in property ownership. It also protects the ownership of foreigners.
Costa Rica has a very hospitable and cordial population. The Ticos are very polite and attentive.
Costa Rica is (still) affordable, the cost of living is lower than in Europe or North America
Costa Rica has a well-functioning health system
Costa Rica is often called “Switzerland of Central America”

And – like many others – we have fallen in love with this wonderful country very quickly and have been living here since 2012.